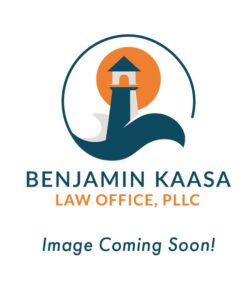 One of the most common questions I have received from people over the years is “What do you like to be called: Ben or Benjamin?” My response to this question is unchanged.  During my twenty-one years as an amateur ice hockey referee I responded to any one trying to get my attention with something  nicer than “Hey You!” So it is okay to call me Ben or Benjamin.

It was my early experiences as a referee that gave me the initial idea to become an attorney.  The idea of becoming an attorney was further implanted after I obtained my political science degree from the University of Minnesota-Duluth.  Officiating involved learning and enforcing a set of rules between players, coaches, and fans.  Political Science requires people and governments to create, understand, and enforce policies.

After I received my law degree in a community that was passionate about ice hockey I then moved to International Falls, Minnesota.  As most people know, International Falls has a lot of history in high school hockey; it produced multiple collegiate players and coaches.  I didn’t go to International Falls to become a good hockey player or coach.  Instead, I moved there to clerk for now retired Judge Charles H. LeDuc II … and to keep refereeing amateur hockey. I was a law clerk for over four years, and Judge LeDuc was assigned to hear cases from both Koochiching County and Lake of the Woods County (Baudette . . . which has also produced a lot of great collegiate and professional players).

I moved to Duluth in 2010.  I initially began practicing law as an attorney with a small firm in Downtown Duluth.  However, after less than six months working for the small firm that drew me to Duluth. I decided to open my own office.  My doors opened for business on April 2, 2011.

Now ten years have gone by.  I have been practicing cases in Minnesota since 2010.  I have been practicing cases in Wisconsin since 2015.  The number of cases handled across both states is well into the several hundreds.  This count does not include those cases where I have been used as a mediator, evaluator, or guardian ad litem.  It is my work in these last three roles that I have found to be the most professionally satisfying and where I want to make my most significant mark moving forward.

But running a law office is not the only thing that I do.  When I am not fulfilling the demands associated with being an attorney I am a husband and father.  While I stopped reffing hockey in 2017 I thoroughly enjoy getting on the golf course when the weather allows for it. If there is time after these three things then hopefully I am out traveling with my family somewhere across the Midwest or country.

I am admitted to practice in the following jurisdictions:

Kirsten joined the office in June of 2018 after wrapping up several years working as a paralegal for local attorney, Craig Hunter.

Child custody is one of the most difficult decisions for a family to make. It’s also one that many couples find stressful and overwhelming. That’s why it’s important to approach the decision with guidance from social and governmental entities that are legally mandated to help guide you through all of the decisions you’re faced…
Continue reading…